A sharp economic growth slowdown in 2020, with more downside risks on the horizon. 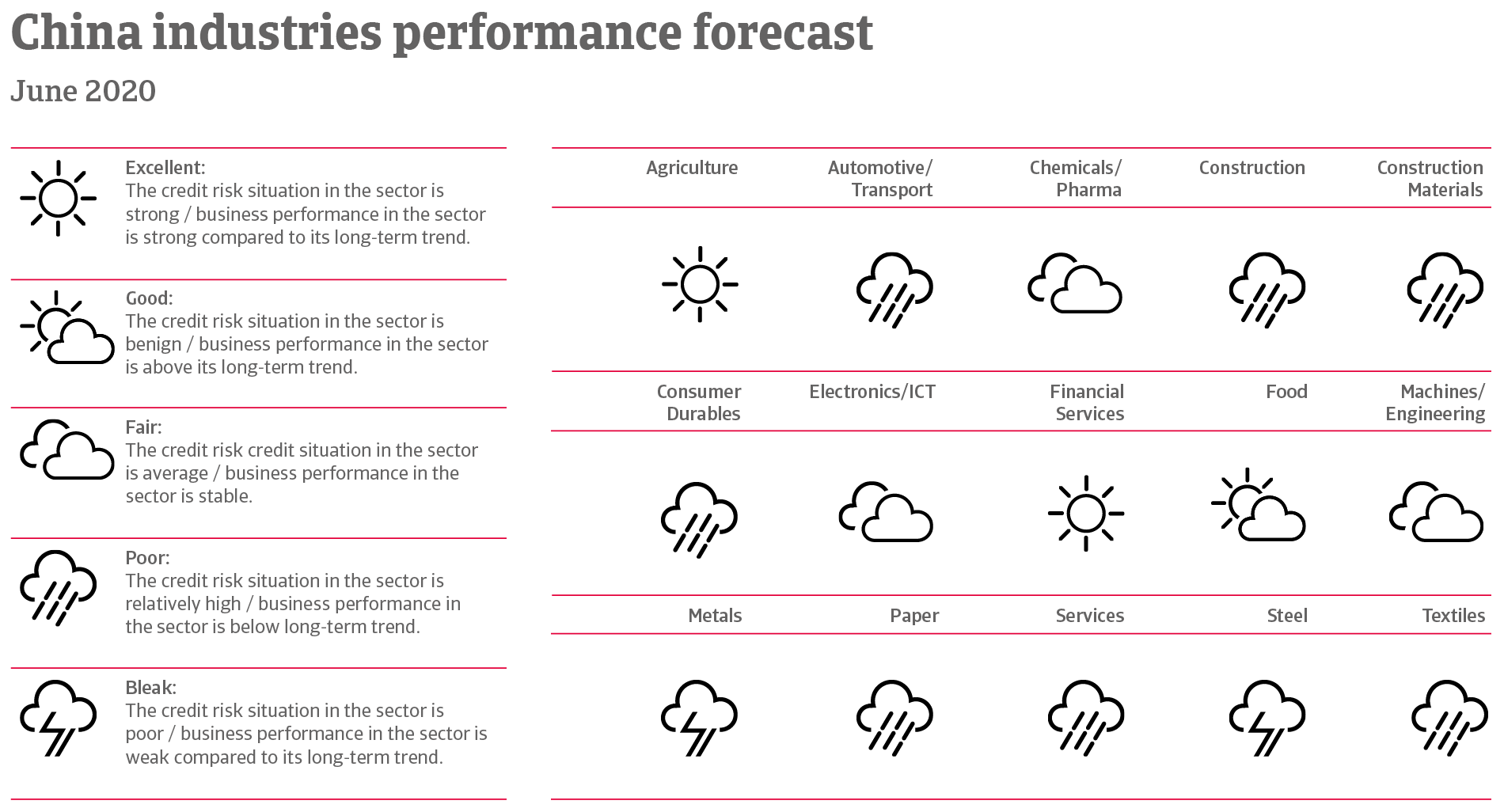 A massive GDP growth slowdown in 2020

The coronavirus outbreak has severely hit the Chinese economy in Q1 of 2020, immediately impacting retail and wholesale, travel, leisure, catering, real estate, transportation, and shipping. Chinese GDP contracted 6.8% year-on-year in Q1 of 2020. Cash flow of many businesses has come under pressure as sales sharply deteriorated while salary, rental and interest payments have continued. Mainly impacted are those private-owned business that already prior to the outbreak recorded limited cash flow. Since large manufacturers across the country stopped operations in early 2020, this has caused significant disruptions to supply chains in China and elsewhere.

The Chinese government has reacted quite rapidly in order to contain the spread of the virus, disposing comprehensive travel bans, quarantines, the "lock down" of entire cities, and factory shutdowns. Resumption of work after the Chinese New Year was delayed in various industries. Those measures and the direct economic impact of the disease had a massive impact on domestic demand, industrial production, investment and exports.

Despite the lifting of lockdowns, resumption of production and massive stimulus measures (monetary loosening, and additional fiscal support for infrastructure, consumption and healthcare), the economic growth rate is expected to decrease sharply year-on-year in 2020, forecast to increase by 1.5% this year (up 6.2% in 2019).

This subdued economic performance is due to the fact that China has seen a crippling of its manufacturing and industrial output in Q1 of 2020. A comprehensive economic rebound is constrained by lingering domestic demand weakness. Currently consumers remain cautious about their spending amid the uncertainty over income and job prospects. At the same time, sluggish demand from overseas markets are hitting Chinese exports, expected to decrease by more than 7% year-on-year in 2020. The Chinese economy is particularly affected by the deterioration in consumer demand and distortions of supply chains in Europe and the US.

It remains to be seen if the outbreak can be contained in China in the coming months. Additionally, there is the downside risk that the global coronavirus outbreak will be even more severe in terms of depth, longevity and economic impact, triggering a deeper recession of global growth than currently anticipated.

The Sino-US trade dispute remains another downside risk. While the January 2020 “phase one” trade deal with the US provided some relief for the Chinese economy, ongoing US tariffs on a wide range of Chinese export goods will continue to have an impact. Another escalation of the Sino-US trade war is still not off the table, given the ongoing issues (e.g. Chinese subsidies and intellectual property theft).

Fiscal and monetary measures underway, but high debt is an issue

In Q1 of 2020 the government and the central bank immediately took measures to cushion the impact of the coronavirus outbreak and to support the economy, including supply of food and medicine, injecting more liquidity into the financial market as well as lowering financing costs and increasing credit support for companies. In May 2020 the government announced extra stimulus measures worth about USD 500 billion in order to support the economy, help businesses and to bolster employment.

The Chinese authorities still have room for more stimulus via monetary and fiscal policy if needed (central government debt remains at a manageable level of less than 25% GDP and is financed domestically). However, higher infrastructure spending is somehow constrained by a lack of suitable large-scale projects, and measures to boost the real estate sector are limited by the fairly high levels of debt that have been built up in the economy.

With total debt now heading toward three times the size of the economy, financial stability has been high on the agenda prior to the coronavirus outbreak. Non-financial corporate debt is at 155% of GDP, and the sharp increase in household debt during the past five years has been mainly the result of mortgage borrowing. Including off-balance sheet borrowing, local government debt amounts to 60% to 70% of GDP. The administration faces a difficult balancing act between supporting economic growth and ensuring an orderly financial deleveraging process in the mid-term.

Business insolvencies in China increased over the past couple of years due to lower economic expansion and the rebalancing of the economy from export- to consumption-led growth. The expansion of the formal economy has put many low-cost manufacturers out of business. Sector-wise highly indebted companies in industries and segments with excess capacity remain vulnerable, such as coal & mining, paper, printed circuit boards, textiles, shipbuilding, solar, steel/metals, and textiles.

It is expected that business insolvencies will increase sharply in 2020. Mainly affected are small and medium-sized private businesses, as many of them - even those active in better-performing industries - often suffer from limited financing facilities.

Despite the recent “phase one” agreement Chinese businesses dependent on sales to the US remain vulnerable, especially in segments where US competitors are vocal in calling for an end to ‘unfair trade’, such as metal, electrical machinery/electronics, textiles and tyres.

Overall, the political situation in China is stable, with the Chinese Communist Party (CCP) firmly in power. President Xi Jinping has consolidated his power within the CCP, and is seen as the most powerful Chinese leader since Deng Xiaoping.

Despite the signing of a so-called ‘phase one’ trade deal between the US and China in January 2020 the trade war has not ended yet, and current issues between the US and China have a much broader scope than trade alone. They also encompass a non-level playing field for direct investments, intellectual property issues, several aspects related to China’s role in the world economy, and growing competition for political influence in the Asia-Pacific region. Due to differences over economic and political order principles, neither a significant de-escalation nor a comprehensive trade deal are in sight.

The outcome of the ongoing rivalry between the US and China, i.e. whether a cooperative or antagonistic balance of power relationship will emerge between Beijing and Washington, will shape the future political and economic order of the whole Asia Pacific region.

Coronavirus: an unwelcome guest at a bad time

The coronavirus outbreak arrives at a time when global growth is already expected to slow and negatively impacts growth and insolvencies.

China: Increase in trade credit risk on the horizon?

Survey respondents in China expect trade credit risk to increase over the coming months. Find out more about their business challenges going forward.

The number of protracted payments and insolvencies was high in 2019, and is expected to increase further in 2020, mainly affecting private-owned producers.