GDP growth is expected to recover only modestly as the oil fund is nearly depleted, and ongoing political uncertainty weighs on the economic performance. 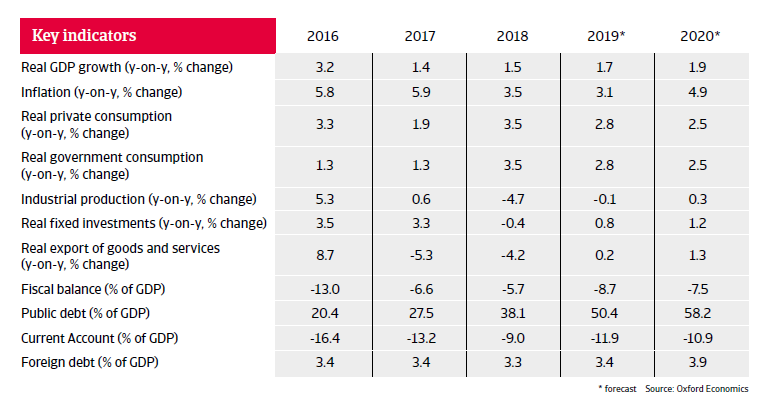 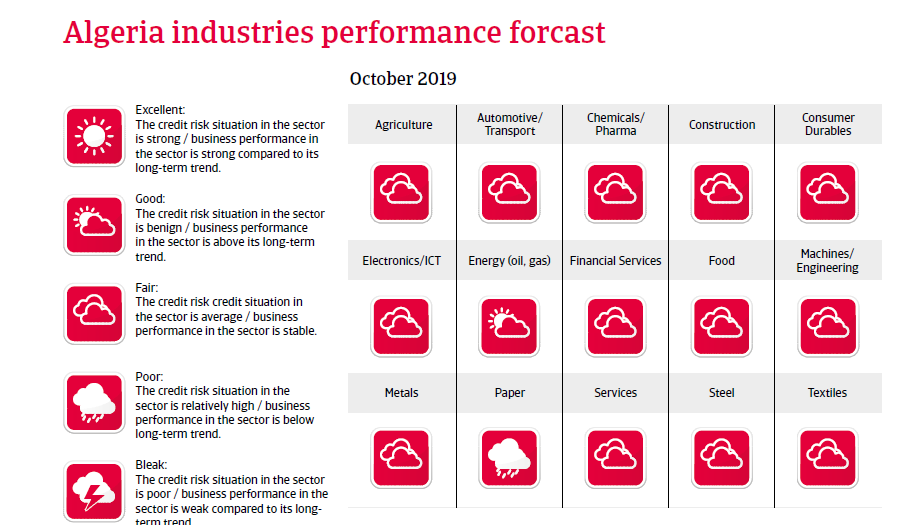 Early April 2019 President Bouteflika resigned after weeks of countrywide mass protests against his candidacy for re-election (Bouteflika was the incumbent since 1999 and is in poor health). Presidential elections originally planned for July 2019 were postponed due to a lack of candidates, and finally scheduled for December 2019. However, street protests have continued, demanding an overhaul of political institutions before any polls and the resignation of several members of the government. The risk of further mass protests ahead of the elections against the government and the military remains high.

The risk of further social unrest is fuelled by major shortcomings (endemic cronyism, high unemployment, lack of affordable housing and high living costs). While the official unemployment rate is at 12%, unemployment of people under 30 (this age group accounts for two-thirds of the population), amounts to more than 25%.

Algeria’s economy is underpinned by the oil and gas sector, which accounts for more than 95% of export revenues, and 60% of the government budget. The government has tried to limit the economic impact of the 2015/2016 deterioration in oil prices by using fiscal savings accumulated in the country’s oil stabilisation fund during the oil price boom to prop-up public spending. Despite the rebound in oil prices GDP growth is expected to recover only modestly in 2019 and 2020 (below 2% annually), as the oil fund is nearly depleted, and the ongoing political uncertainty weighs on the economic performance.

Algeria’s budget deficit will increase again in 2019 due to higher capital and social spending. While more than a fifth of the budget is used for subsidies, tackling the vast welfare system remains sensitive given the potential for more social unrest. As it is possible to finance the deficit by central bank borrowing for the time being, the incentive for fiscal reform remains relatively low.

The current account deficit is expected to remain high in 2019 and 2020, at about 10% of GDP. Since Algeria remains reluctant to borrow externally and FDI inflows are limited, the deficit is mainly financed by international reserves. While foreign debt is still low (at about 3.5% of GDP), government debt is sharply increasing, from 9% of GDP in 2015 to a forecast 58% in 2020. Foreign reserves remain at a comfortable level, however, they continue to rapidly decrease, from 30 months of import cover in 2014 to 16 months in 2019 and 12 months in 2020. To protect the reserves the government tightened import restrictions in 2018.

To ensure prosperity and stability in the long-term, the authorities would have to accelerate their current rate of economic diversification. However, government intervention (it is estimated that 90% of Algeria’s GDP is still controlled by the state), red tape, corruption, limited access to finance and a rigid labour market still hamper private enterprise initiatives and foreign investment, slowing down the necessary economic transition. The burden on fiscal policy and domestic financing pressures could be alleviated if the government chooses to start borrowing on the international market and open up the economy to more foreign investment.

The economy is currently forecast to expand by about 3.5% in 2020, however, this depends on decent performance in agriculture, tourism, and exports.

In 2019 and 2020 growth is expected to exceed 5%, supported by exchange rate liberalization, interest rate normalisation and increasing tourist arrivals.