Despite improvements, the proportion of overdue B2B invoices and that of uncollectable B2B receivables in Hong Kong remain some of the highest in Asia Pacific.

Despite improvements, the proportion of overdue B2B invoices and that of uncollectable B2B receivables in Hong Kong remain some of the highest in Asia Pacific.

Suppliers in Hong Kong perceive credit sales as an easy and convenient way to nurture long-term cooperation and expand business domestically and internationally. Despite reporting improvements this year, the proportion of overdue B2B invoices and the total proportion of uncollectable B2B receivables remain some of the highest in Asia Pacific.

Trading on credit – because it’s easy and convenient 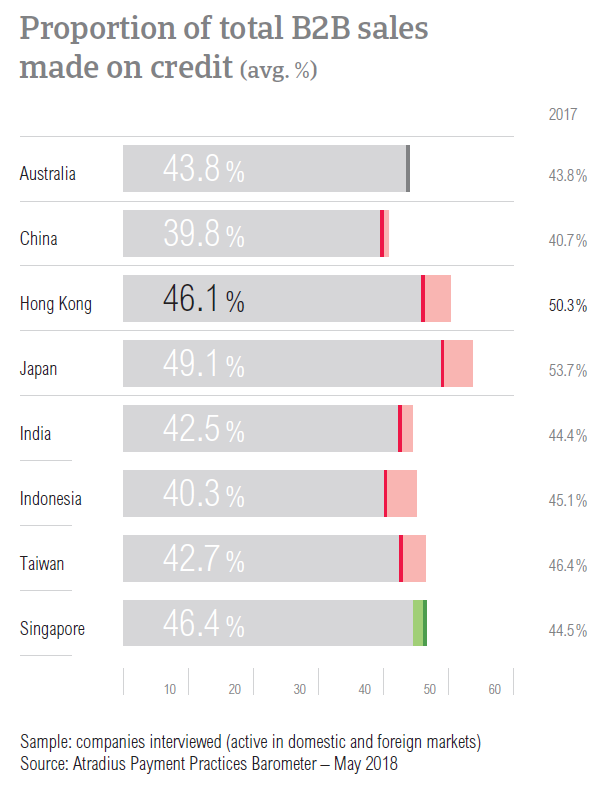 Respondents in Hong Kong reduced their sales made on credit from an average of 50.3% in 2017 to 46.1% this year. Like their peers in the rest of the Asia Pacific countries surveyed, suppliers here also used credit in a higher proportion of sales to domestic B2B customers (on average, 48.3%) than to B2B customers abroad (43.8%).

Most respondents in Hong Kong mentioned that they use credit sales to develop their companies locally and nurture their current business relationships. There is also a shared belief that selling on credit domestically is easier and more convenient. When lacking information on the customer’s business and payment performance (mentioned by 75.0% of respondents), when the buyer’s payment behaviour is poor (25.0%) or when the economic or political risk is high (25.0%), respondents in Hong Kong refrain from granting trade credit to their domestic B2B customers.

Trading on credit helps us stabilize and expand our business.

Companies in Hong Kong mentioned that their decision to grant trade credit is motivated by the same reasons - to boost business internationally and encourage cooperation. Ease and convenience have also been mentioned in regards to trading on credit with B2B customers abroad. The main reasons why suppliers in Hong Kong would refuse to grant trade credit to foreign B2B customers are: a lack of information on the customer’s business and payment performance (mentioned by 57.1% of respondents) and high economic and political risk in the customer’s country (mentioned by 28.6% of respondents). 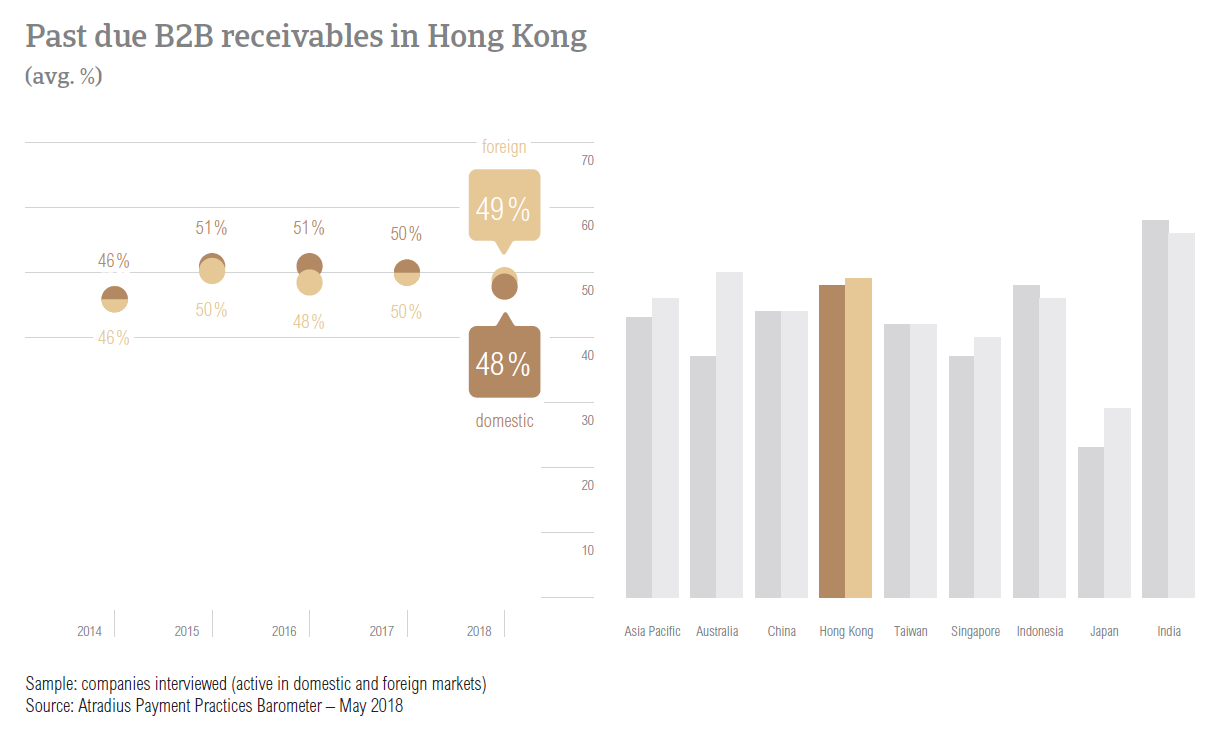 The average Days Sales Outstanding (DSO) figure in Hong Kong  is 35 days, one day shorter than in 2017 and at the same level as it was in 2016. It is also five days shorter than the regional average. Most respondents in Hong Kong (60.3%) do not expect their company’s DSO to change over the coming 12 months. Of those expecting a change, 18% said that they foresee a slight increase and 11.3% a slight decrease. 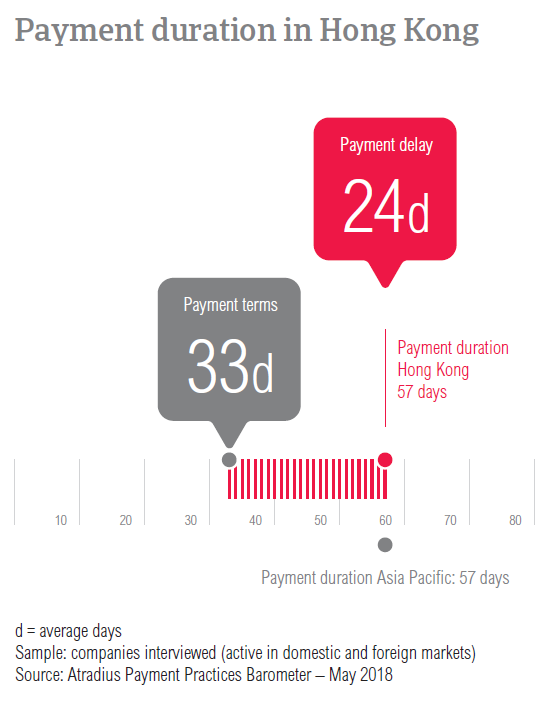 Suppliers in Hong Kong (54.2%) said that domestic payment delays occur most often because of insufficient availability of funds and the complexity of the payment procedure (36.4%). Both percentages reported in the country are significantly higher than the regional averages.

The complexity of the payment procedure and disputes over the quality of the goods delivered or services provided were the main reason for payment delays by foreign B2B customers. These were reported by 40% and 37.4% of respondents respectively.

To manage the impact of overdue B2B invoices, 24% of respondents had to postpone payments to their own suppliers, 21.3% needed to pursue additional financing and 21.3% to request a bank overdraft extension. 15.9% of respondents mentioned that payment delays led to revenue loss.

Most willing to migrate towards e-invoicing 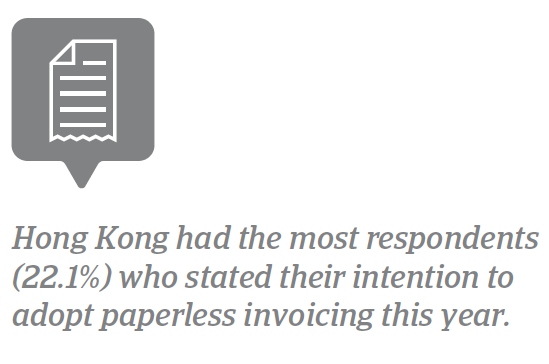 The majority of respondents in Hong Kong (53.3%) said that they are already using e-invoicing with their B2B customers. Compared to other countries surveyed in Asia Pacific, this is one of the lower percentages. However, Hong Kong had the most respondents (22.1%) who stated their intention to adopt paperless invoicing this year. In contrast, 20.6% expressed their lack of interest in e-invoicing and 4.0% said that they are no longer using this.

Despite it not being reflected in the findings above, respondents in Hong Kong believe that electronic invoices impact payment duration positively. 61.5% of respondents mentioned that they received payments quicker and only 4.8% that they experienced a slowdown. According to 33.8% of respondents, e-invoicing had no noteworthy effect.

Most businesses expect turnover losses of up to 20%

Asked whether they are expecting any turnover losses due to trade uncertainty and protectionist measures, 35% of respondents said that they do not foresee an effect on their businesses. Of those who believe that their companies will be affected by global developments, 22% foresee an impact on turnover of up to 10% and 21% that the impact will be between 10% and 20%. 11% believe that the impact on their business’s turnover will be more significant, between 20% and 30%. Only 3% of respondents believe that trade uncertainty and protectionist measures across the world will impact their business’s turnover positively. 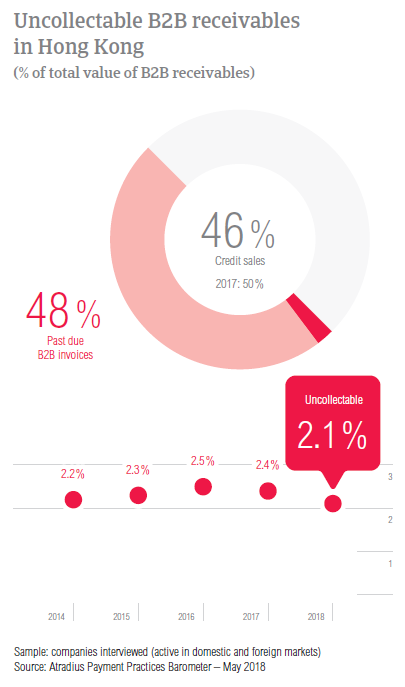 Uncollectable receivables originated most often from B2B customers in construction, consumer durables, business services and services. The main reasons for writing off B2B receivables as uncollectable are the customer going bankrupt or out of business (mentioned by 46.5% of respondents), the inability to locate the customer (40.3%) and the failure of collection attempts (35.7%).

Suppliers in Hong Kong reported that B2B customers in the food and business services sectors generated some of the longest payment delays, on average 29 days.

The most frequently reported reasons for payment delays in the food sector are disputes over the quality of goods delivered or services provided (59%) and the inefficiencies of the banking system (47%). Suppliers reported that payment delays from B2B customers in business services occurred mainly because of insufficient availability of funds (38%), the complexity of the payment procedure and due to disputes over the quality of goods delivered and services provided (each reason mentioned by 35% of respondents).

The global economic upswing continues to strengthen but US policy uncertainty and a potential trade war could quickly darken the bright skies.

Business insolvencies in China are expected to increase further this year in 2018, as companies face tighter credit conditions and the economic rebalancing process is on-going.

Asia Pacific: an increase in payment duration in 2018

Despite minor improvements, the impact of late payments cannot be denied and businesses in Asia Pacific need more time to convert B2B invoices into cash.